Thanks to the “Trustworthy AI” chair that hast just been launched in september 2022, we have three internships opportunities available, each of them with a secured PhD funding (one if...

Graduation ceremony for our Enseirb-Matmeca engineers

On Saturday 29 January 2023, we celebrated the 2021’s graduation ceremony of Enseirb-Matmeca. It was an opportunity for each department of the school (and for the computer science department that...

AI4Industry was held from 16 to 20 January 2023 at a multitude of sites in New Aquitaine, with the support of the R3IA which I have been leading since January...

As part of the “Université de la terre” 2022, organised at Unesco, Paris, I was able to take part in panelist discussion, for general audience, on the problems of trust...

Due to some important construction work around the LaBRI building, a central electrical board exploded, leading to an emergency shutdown of all (yes, all) of the Lab’s servers, including the...

Glucose is an award winning SAT solver based on a scoring scheme we introduced in 2009 for the clause learning mechanism of so called “Modern” SAT sovlers (see our IJCAI’09 paper). It is designed to be parallel, since 2014 and was enterly rebooted in 2021. Glucose is coded and maintened since its beginning by Gilles Audemard and myself.

This page summarizes the techniques embedded in all the versions of glucose. The name of the Solver name is a contraction of the concept of “glue clauses”, a particular kind of clauses that glucose detects and preserves during search.

Glucose is heavily based on Minisat, so please do cite Minisat also if you want to cite Glucose. Glucose 3.0 is based on the Minisat 2.2 version. We strongly encourage you to visit the Minisat web pages, and to try the original Minisat too.

Learning (in CDCL algorithms) was firstly introduced for completeness. But, if we study all Glucose 2’s traces of the competition 2011, for instance, phase 2, in the categories Applications and Crafted, Glucose 2 learnt 973,468,489 clauses (sum over all traces) but removed 909,123,525 of them, i.e. more than 93% of the clauses are removed. This view is really new and contradicts previous beliefs. Thus, we thought that one of the performance keys of our solver is not only based on the identification of good clauses, but also on the removing of bad ones. As a side effect, by aggressively deleting those clauses, Glucose increases the CDCL incompleteness (keeping learnt clauses is essential for completeness). We should also emphasize here that Glucose 2 was ranked fourth on the parallel track in the SAT 2011 competition beside the fact that it was sequential. This shows that even with a single core, our solver performed better, in user time (not CPU) than many parallel solvers exploiting the 8 cores of the parallel machine. One of the reasons for this is that Glucose 2 is good at finding the shortest (but easiest) proof as possible.

Among the short list of programs of Prof. Don Knuth, you may want to take a deep look at the SAT13.w, his CDCL implementation. Very interesting and insightful. With glucose-techniques inside!</p> 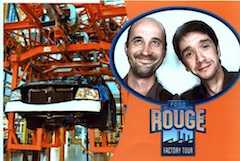 Glucose is developed by a very friendly team: Gilles Audemard and myself. Above is the picture we took during the SAT’2011 conference at Ann Arbor (while visiting the Ford manufactory).

This is the last official release of Glucose. We used the same unmodified version for a few competitions now. This is the release of glucose that was first used for the SAT Competition 2018 and then also for SAT-Race 2019.

Here is the source code of Glucose 4.2.1 (glucose-syrup). The main modifications are based on the extension of the LCM strategies proposed at IJCAI 2017, which ”revived” the vivification technique). You may want to read the companion short paper published in the SAT 2018 booklet to better understand this version.

Here is the source of Glucose 4.1 (glucose-syrup), the refactorized, parallel version that participated to the 2015-2017 contests. You can also download the source submitted to the contest but we worked to clean the code, so please do prefer this version. You may want to read the companion short paper published in the SAT 2016 booklet to better understand this version.

Here is the source code of Glucose 4.0 (glucose-syrup), the cleaned, refactorized, parallel version that participated to the 2014 contest in the parallel track. Of course, you can download the exact version submitted to the contest directly on the contest web site, but we strongly encourage you to use this version instead.

What's new in this version?

</ul> </p></div> Here is the source code of Glucose 3.0, the version that participated to the 2013 contest, but with cleaned code. You can download the exact version submitted to the contest directly on the contest web site, but we strongly encourage you to use this version instead.

Here is the source code of Glucose 2.1, the cleaned version of the one that participated to the SAT 2012 Challenge. Comments and feedbacks welcome!

Here is the source code of Glucose 2.0, as it was submitted to the 2011 contest (sorry, again, for the lack of comments).

Here is the source code of Glucose 1.0as it was submitted to the 2009 contest (sorry, again, for the lack of comments).

You should take a look at our IJCAI'09 paper for detailed results/ideas underlying this work.

How to use it? A Short guide to beginners

We are often asked how to use/install/call our SAT solver.